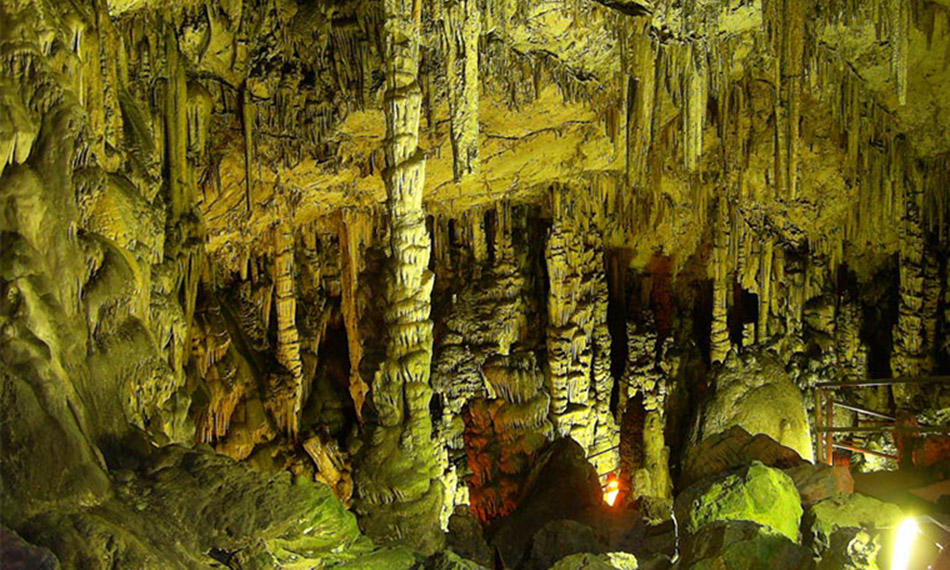 The impressive Cave of Zeus, the Diktaion Cave, is located just 10 minutes walking-distance from Psychro, in Lassithi Plateau, at an altitude of 1025m. Head to Psychro are and explore the secrets of this cave, there is plenty of parking areas, with plenty of restaurants nearby. Two paths leading to the cave start from the parking area. The easiest path is the left one, because in the right path (the oldest) the stones are worn by thousands of tourists and are slippery. The route to the cave is magnificent as the view to the Lassithi Plateau is breathtaking. If you do not want to walk, there are donkeys to transfer visitors to the cave. Near the entrance of the cave there is a kiosk where you can buy tickets for a small price. The cave, which has an area of 2200 sq.m, is well lit and the paths in it come along a well-designed path of 250m length.
Near the entrance, on the right there is a hall (length 42m, width 19m, 6.5 m), while the great hall starts at a lower level. On the floor of the hall, there are rocks that have fallen from the top, while others have come to the surface by excavations. Southeast of the chamber there is a large stalagmite complex. Also, there are some buildings. A smaller hall is located on the northwest side, from which important findings have been extracted. While moving inside the cave, the visitor enters the great hall. Its entrance has a width of 18m and a height of 14m, while the largest part of it is covered by solid rock and large stalagmites. From there, a downhill staircase starts which leads to the end of the hall. The great hall has a maximum length of 84m, width 38m, height 5-14m. The floor is full of scattered rocks. On the left hand, the visitor can easily discern a small chamber with dimensions 10m x 5.5m It is called 'cradle of Zeus' and, according to the myth, is the room where Zeus was born. On the right another larger hall is shaped (length 25m, width 12m, height 10m), which is divided into two sections by large columns. The first part is located 35m lower than the cave entrance. It hosts a marvelous water lake (16m x 8.5m) which has water all year round. The pond is filled with coins from visitors. In the second part, there is a large and very spectacular stalactite, called as the “mantle of Zeus”. Unfortunately, this stalagmite has been damaged by visitors. The entire great hall has impressive decor with large columns, stalactites and stalagmites. The Diktaean cave is one of the most spectacular caves in Crete.

►Explore the best places of Lasithi!
Book a Tour in Diktaion Andron or get there with your own car rental. 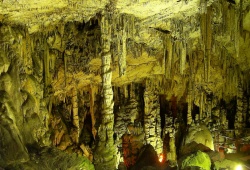 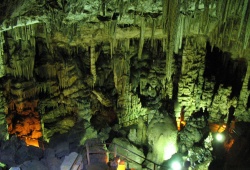 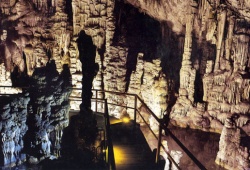 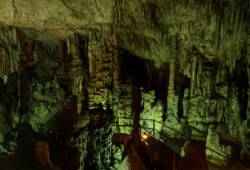