This private museum is located in the mountainous village of Ano Pitrofos, very close to Menites in Andros. This Cyclades Olive Museum is housed in a traditional building that was bought and restored by civil engineer Dimitris Chelmis, originating from Pitrofos and personal guide to the museum. The old oil mill that houses the museum is part of a two-floor building and occupies a large part of the ground floor (called katogi). The upper floor used to host the home of the owner. This fine example of animal-powered olive oil producing mill was very frequently met in the countryside of Andros island, operating until the 1960s. The building of the Cyclades Olive Museum dates from earlier than 1857 and was probably operating during the 18th century. Its architectural elements, like arches and domes, are common in rural architecture of Andros and generally in the Cyclades islands. Until 1967 the oil mill stopped operating and until 1997 it was used as a storehouse. That year, the entire building (oil mill and house) was bought by its present owner, Dimitris Chelmis, and it was later restored and transformed into a museum. Visitors can get a view to the traditional oil production method in Andros and learn a lot about local culture. A video with an animal powered olive oil production has been filmed in the museum and is screened to visitors. 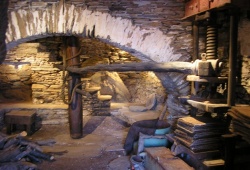