Drakodoschisma is an impressive rock that seems to be a human creation. The top of this imposing rock is surrounded by enchanting turquoise waters and a small legend is hiding behind its strange shape. It is said that about 800 years ago, a dragon settled on the island, killing and eating all the habitants. As a result, the island of Skopelos was deserted for almost 400 years until Agios Riginos found it out and decided to exterminate it. He traveled up there and when the dragon saw him, it got frightened and left. The Saint chased the dragon until it jumped into the sea, having no other means of escape. The rock from which the dragon jumped was torn and as such the area was named Drakodoschisma. The coast created is only accessible by sea but from the top you can admire the idyllic view. 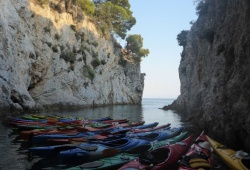 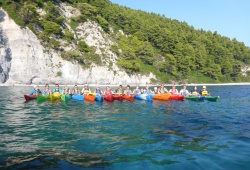