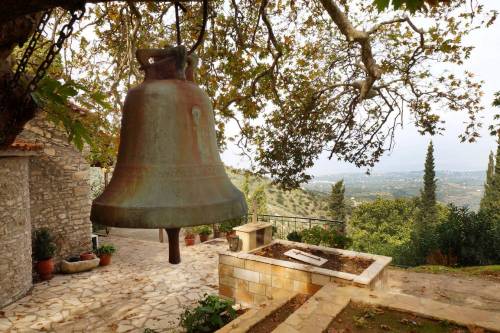 This monastery is dedicated to the Virgin Mary or else of Panagia Katsimikada and situated on fabulous location, 450 metres above sea level, among mountainsides and lush greenery, approximately 9 km north of Kyparissia Town. The area is gifted with much greenery and visitors can see a great variety of flaura and fauna with apple trees, platens, chestnut trees, cypresses, pines, firs, willows and more. The monastery offers a beautiful panoramic view of Kyparissia bay, Zakynthos Island and the endless lowlands of Messenia perfecture. The exact date on which the monastery was built is unknown although many historical events brings us close to its construction date. These are the silver cressets made in 1885, the silver chalices which were created in 1880 and 1885, the ancient icons of 19th century origin and the Archangels Michael and Gabriel seen on the adjacent doors of the beam, which were created in Mount Athos in 1923. According to the legend, near the monastery something miraculous happened. A shepherd who pastured his goats in the area noticed that one small goat, called Katsikada, separated from the herd and came back with its water on its beard. There was no source of water in the area so the shepherd followed it one day to find a water source between some bushes. When he went back and told the villagers, they came to the spot and cut the bushes. That is when the holy icon of Virgin Mary's birth was discovered. Considering this as a holy sign, the villagers built the Monastery of Katsimikada on that exact spot. 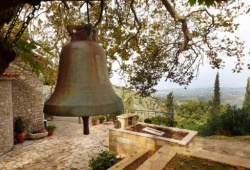 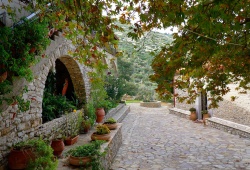 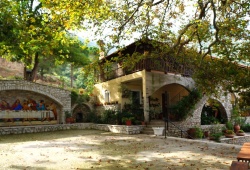