The Monastery of Agios Gerasimos is the largest and most famous of all Kefalonia. It is situated in the south of the island near the villages of Valsamata and Fragata on Omala plateau, 400 meters above sea level.To get there you pass first by a garden with 40 old wells.
Agios Gerasimos Church in Kefalonia is dedicated to saint of the island Saint or Agios Gerasimos whose remains are kept in the monastery in a silver casket which is periodically opened by the priest of the church to allow pilgrims to apply directly to the Holy prayers and to kiss the remains.
Agios Gerasimos was a monk at Mount Athos, then went to Jerusalem where he lived for 12 years, later went to Crete and Zakynthos to finally arrive in Kefalonia where he died in August 15th, 1579. He was declared a saint in 1622 of Greece. Agios Gerasimos was known for his miraculous abilities to cure people with mental illnesses. His miracles which became widely known across the country.

Explore the secrets of Kefalonia!
Book a Trip and see things to do in Kefalonia. 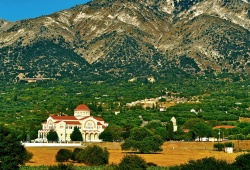 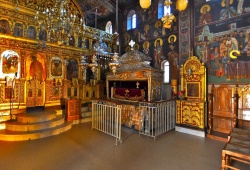 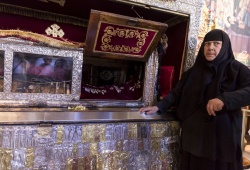