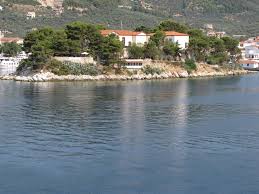 Th fortress was built in 1211 by the Venetian brothers Andrea and Jeremia Gizi, in their need to preserve themselves and Skiathos town from pirate raids. Inside the fort there was a chapel of St. George, patron of Venice, which was probably built by the Gizi brothers. Because of that church, Bourtzi was also called "Kastelli St. George." The fort was destroyed in 1660 when the island was conquered by the Venetian admiral Francesco Morosini. In 1823 through the remains of the fortress, the inhabitants of the island, islanders and refugees from surrounding areas, managed to preserve it.
After the liberation, the Bourtzi worked the first quarantine in Skaithos. In 1906 the center of the peninsula an elementary school was built donated by Andreas Syngrou.
Today, the old fortress preserved a few remnants of the walls, as well as divided left and right of the road leading to the entrance of the old school, the positions were the church of St. George and the reservoir of the fort. Along the route there are still the old cannons.
Now the old primary was converted into a cultural center with summer theater and every summer takes place a number of cultural events (concerts, plays, etc.) take place. 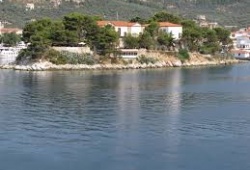 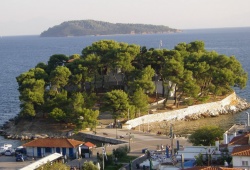 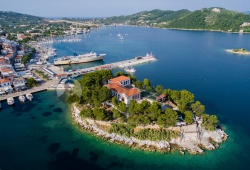