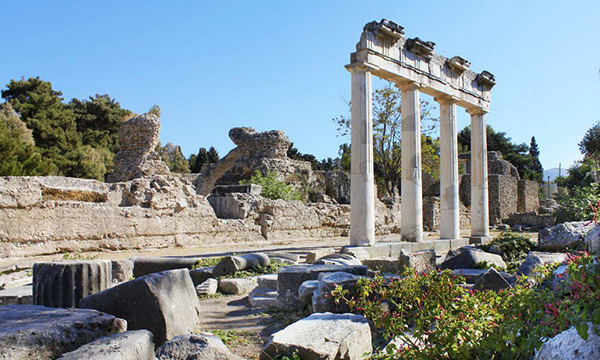 This ancient site is an imposing excavation area where a number of temples, baths, and houses with remaining mosaics, columns, and other pieces of construction belonging to several periods have been found. So, in this case, the market has a lot more to reveal than a simple marketplace. The Ancient Market in Kos is a large excavation area, with many interesting historical and architectural findings. For example, it has part of a wall made of large stones, that counts on 80 metres long by 2,5 metres high. From the external side of this wall there used to begin an Eastern arm for the harbour protection. This arm was also taken advantage of in architectural terms, as it was used for supporting a colonnade of 50 metres length with a row of precincts. These columns date around the 4th and the 3rd centuries BC and they were partly restored during the Roman period.
The ancient Market itself, was a market that took advantage of its location next to the harbour, as it was ideal for trading and for general movement, to the point that Agora used to be centre of Kos. Some of the most recent findings are an 80 metres wide by 300 metres length building, with a large stairway that still keeps its impressiveness, leading to an inner yard. There are also two restored columns that give the idea of a portico. In addition, it has also some ruins of an Aphrodite Shrine, as well as a small temple, seemingly in the honour of Hercules, and a Christian Basilica dating from the 5th century; all of them facing north. Some other findings are the mosaic floors of some precincts, which date from the 3rd century BC and a statue of Hippocrates. There are also other interesting findings inside the above mentioned Aphrodite Temple. According to what has been established, the oldest parts of the ancient market date from the 3rd century BC approximately.

Explore the secrets of Kos!
Book a Tour and explore Kos, the island of Hippocrates to visit the best hidden beaches, sights and enjoy boat cruises 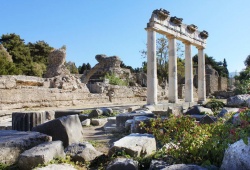 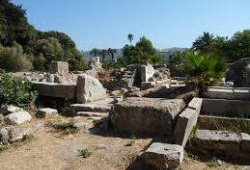 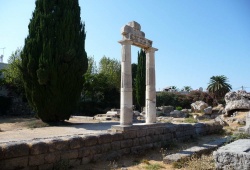