The ancient theatre of Delphi is situated within the Temple of the Pythian Apollo. It is the largest structure in the Temple of Apollo and forms an integral part of it, directly connected to the myths and cult of the god. It hosted the singing and instrumental music contests of the Pythian Games in Greece. The 35 rows of the theatre could seat nearly 5000 people, though the lower seats were constructed in the Hellenistic and Roman periods. The theatre went through many reformations. However, it has kept its basic structures: the stone seats, a round-shaped stage, and an orchestra. Today it hosts many ancient plays and other cultural events, mostly in summer.

Explore the best place of Delphi!
Book a Tour and visit important archaeological sites in and around Delphi 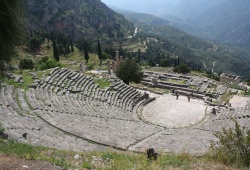